Configure Vizy to connect to your local WiFi network

You can have Vizy connect to a chosen WiFi network by supplying the networking credentials. In order to do so, you need to first connect to Vizy using one of the options above (either connect directly over WiFi or connect via Ethernet cable).

Bring up the WiFi config dialog by clicking on the ☰ icon in the upper right corner of your browser. (Make sure your browser is pointing to vizy.local!) 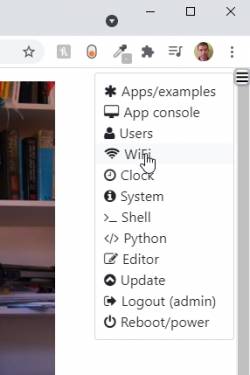 And select Connect to network 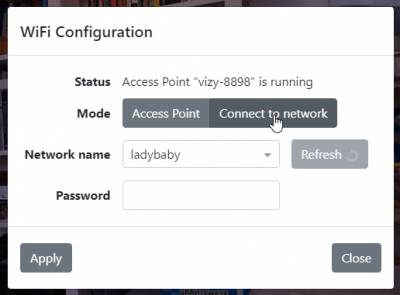 Then select the network and enter the network's password and click on Apply. Vizy will then attempt to connect to the network using the credentials you supplied. While it's attempting to connect, Vizy's button will change colors. If Vizy is successful, Vizy will beep with a high pitch, which sounds like this:

If it's unsuccessful, Vizy will beep with a low pitch double-beep and then re-enable its network for you to reconnect and try again. The unsuccessful double-beep sounds like Vizy is a bit annoyed (we think):

If you received a successful beep, it's recommended that you power Vizy down and back up again to help your computer deal with the identity change that Vizy just experienced (vizy.local has changed networks and changed its IP address!) Power down by holding down Vizy's button for 5 seconds until you hear the low-pitch beep. Vizy will then power-off safely. When you power Vizy back on, it will try to connect to the WiFi network that you just configured. You will know that it makes a successful connection when you hear the high-pitch beep (success!) Vizy will now try to connect to this network from now on when you power Vizy up. And you should be able to communicate with your Vizy once again through your browser pointed to vizy.local. You may need to refresh your browser after Vizy reboots, however.

If you received an unsuccessful double-beep, just reconnect to vizy-xxxx as you did before and perhaps make sure that you used the correct password, etc., or try another WiFi network.

But things can still go wrong if say, Vizy successfully connects, but you're unable to communicate with it for some reason (e.g. problems with the network, etc.) When this happens, you need to power up Vizy into safe mode.

Booting Vizy into Safe mode will force Vizy into access point WiFi mode. In other words, Vizy will not try to connect to a previously configured WiFi network.